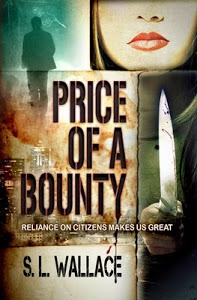 Here’s a reprint of my FOUR STAR (****) review from Good Reads:
Summary of story: A dystopian future world, which may or may not be earth. (There were not any realms with earth names, I think.) The rich and powerful elite run everything, and control information in the poor realm of Tkaron.
But there is a Resistance that is working to overthrow the system. The story focuses on three siblings, Kiera, Scott, and April, who take on different roles in this society. Kiera is a Freelancer, doing anything for money to survive. Scott is a soldier who is, supposedly, working for the government. And April is a civilian trying to survive as a poor worker for a rich family.
They all get caught up in the Resistance and have to make some hard choices, and suffer the consequences. Will they beat the system, or will it beat them?

The Good: It had a few surprises. The subject matter was interesting and futuristic. As a sci-fi fan, this is the type of subject that I like. It was a combination of futurism and realistic action thriller. The main POV character, Kiera, is well-formed and believable. It had truthful, gritty violence in some parts, without gore. The last 10-15% of the book was the most interesting, with some surprises and twists.

The OK: It is a good book, with the world and some of the characters well developed. The book has a changing POV in each chapter. Each of the four main characters describes events in 1st person POV. Sometimes I had to pause to remember who was thinking and saying “I” at a few chapters.

Recommended for fans of sci-fi, and dystopian worlds, and action/adventure.

And this is the first book of a trilogy. You can learn more about all three books and the author at her blog: http://crossroadsofhumanity.blogspot.com/