It was October 5, 1959. Perkins sat in his spacious third floor office in the congressional office building.

In version 1 of The Smart Kid, this building was erroneously called the Russell Building. But I discovered that that name wasn’t given to the building until 1972. Since this scene occurs in 1959, I had to change the sentence, which will appear corrected in version 2.

The building received extensive pop culture visual cachet in the 1970s when film footage of southwest corner was regularly used to represent the headquarters of the fictional OSI organization in the TV series The Six Million Dollar Man and The Bionic Woman.– https://en.wikipedia.org/wiki/Russell_Senate_Office_Building 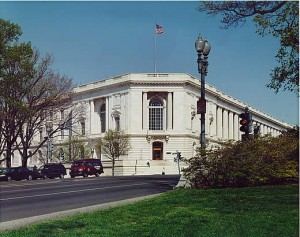