In chapter 13, after Charleen learns Matt’s secrets and thinks that she knows it all, the song on the radio that day is What a Fool Believes by The Doobie Brothers.

Debuting at #73 on 20 January 1979, the single reached number one on the Billboard Hot 100 on 14 April 1979 for one week. The song received Grammy Awards in 1980 for both Song of the Year and Record of the Year.–https://en.wikipedia.org/wiki/What_a_Fool_Believes 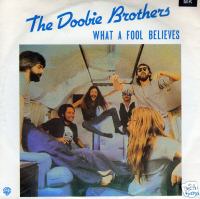