From The Smart Kid:

Charleen studied the framed cover of Life magazine titled The Faces of The American Dead in Vietnam. One Week’s Toll. The number 242 was hand-written in red ink. It was dated, June 27, 1969. Price 40¢

In June 1969, LIFE magazine published a feature that remains as moving and, in some quarters, as controversial as it was when it intensified a nation’s soul-searching 45 years ago. On the cover, a young man’s face—the very model of middle-America’s “boy next door”—along with 11 stark words: “The Faces of the American Dead in Vietnam: One Week’s Toll.” Inside, across 10 funereal pages, LIFE published picture after picture and name after name of 242 young men killed in seven days halfway around the world “in connection with the conflict in Vietnam.” —http://time.com/3485726/faces-of-the-american-dead-in-vietnam-one-weeks-toll-june-1969/ 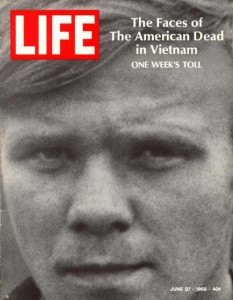 LIFE magazine, June 27, 1969, featuring a portrait of U.S. Army specialist William C. Gearing, Jr., one of 242 American servicemen killed in a single week of fighting during the Vietnam War.