“Blue Moon”‘s first crossover recording to rock and roll came from Elvis Presley in 1956. His cover version of the song was included on his self-titled debut album Elvis Presley, issued on RCA Records. Presley’s remake of “Blue Moon” was the B-side to the single “Just Because”. It was produced by Sam Phillips.

Additional trivia about Blue Moon:
In Jim Jarmusch’s 1989 film Mystery Train, the three distinct stories that make up the narrative are linked by a portion of Elvis Presley’s version of “Blue Moon” (as heard on a radio broadcast) and a subsequent offscreen gunshot, which are heard once during each story, revealing that the three stories occur simultaneously in real time.
(source 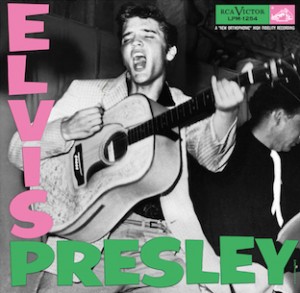