In chapter 4 of The Smart Kid, Charlene, the school counselor uses a Polaroid camera to take photos of her students. (The story takes place in 1979.)
The SX-70 is a folding single lens reflex Land camera which was produced by the Polaroid Corporation from 1972-1981.  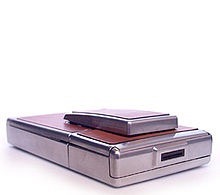 Not until the $40 Model 1000 OneStep using SX-70 film became the best-selling camera of the 1977 Christmas shopping season, however, did its technology become truly popular.

This is the camera that Charlene Therry uses: